Peace For Our Time (ING)

CORUSCANT (POLITICAL) - An official announcement broadcast to the galaxy on Year 21 Day 16 by Emperor Seele I marked an end to the Galactic Civil War and a victory for the New Order. Holonet channels were ablaze with their coverage of the milestone achievement and sentients flocking to them for information.

Across the Emerald Region millions were seen flooding the streets in grand celebration to commemorate this historic occasion. On the Imperial Center, Coruscant, at the foot of the Imperial Palace, hundreds of thousands of voices cried out with the name "Hail Emperor Seele! Hail Emperor Seele! Hail Emperor Seele!" - the crowds were only punctuated with the thunderous boom of fireworks in endless cacophony. The heart of the Empire saw assemblies of millions as they took to the streets, finally free from the threat of terrorism. Banners and Imperial tapestries were unfurled, confetti rained from above and fireworks lit the skies with spectacular illumination. 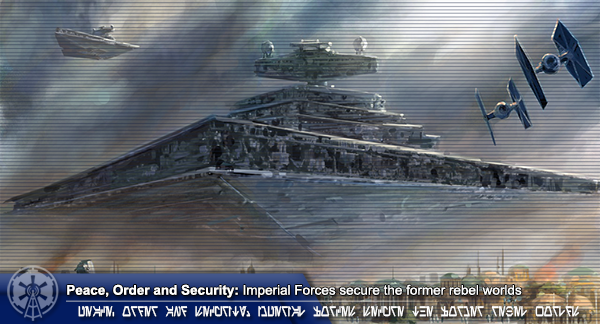 Across the Ruby Region, the celebrations were more reserved. Many, still suffering the aftermath of the battle for the Hosnian system, found their spirits bolstered by an Imperial win. Hundreds of thousands of refugees found themselves now citizens of the Empire and free of the plague of abandonment and the depredations of the criminal cartels whom the New Republic had allied with and left them victim to. Imperial forces who had fought across the system returned now in victory; proof of the promise set forth by the Emperor at the conclusion of open hostility that the people of the system would never be forgotten.

Across the Amber Region, industrial hubs at the Kuat Oversector cheered at the news of victory. Workers and staff were given a week's day off in celebration of the momentous feat the Galactic Empire. The Corporate Oversector, despite being far from the rest of Imperial territory, caught up with the Empire's triumph, giving them joy whilst at the edge of the known space. Frontier worlds held their own parades and celebrations commemorating the historical achievement.

Across the Empire, the resounding roar of victory echoed in every corner of the galaxy, from the Deep Core to the Outer Rim. Citizens rejoice at the fall of the New Republic, recognizing that the Galaxy will now know peace, order and stability.