Rhelg III (Culture) – Celebration erupted across Rhelg III today with the sudden arrival of Emperor Seele I for a previously unannounced visit. From the planet, the Emperor’s spokesperson announced he would begin a tour of various worlds throughout the expansive Regions of the Empire following his first year on the Throne. The tour of Rhelg began with a brief ceremony at the local Imperial Garrison and spilled over unexpectedly into the local COMPNOR youth academy, Drayson Youth Academy, open to Class A students. 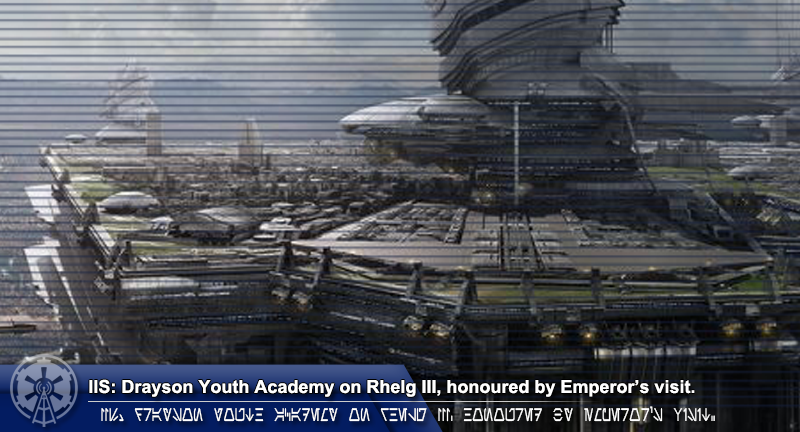 The Drayson Youth Academy educates students in Imperial ideology and citizenship while promoting many physical activities such as camping and hiking. The academy also sponsors trips off-world to planets like Dromund Kaas in order to promote critical thinking and forge interplanetary ties. Graduates of the academy predominantely opt to gain entrance into the Empire's various military academies and were eager to display their abilities to the esteemed visitors.

After a brief meeting with the school’s Dean, [Emperor] Seele met with the top students from the school who would be graduating this year. The Emperor spoke with students, who presented him with a coin, etched with the school’s mascot, as a token of appreciation for his long tenure in various fields of the Empire. The students, eager to show off their various skills, were each given an hour with his Majesty in which they talked with him about the numerous activities that they enjoyed and displayed their prowess in field events. The events included a 400 meter run, an 800 meter swim, and archery--an ancient skill that for many has been forgotten thanks to modern equipment.

Prior to his departure, the Emperor praised the school for its strict adherence to COMPNOR’s youth programs and thanked the students for their unyielding loyalty to the Empire. Quoting Director Ventidius in his closing message to the students “…greatness is achieved again and again in a perpetual hunt for excellence” encouraging them to never be content with their accomplishments of yesterday and to always strive for tomorrow. He went on to send a recorded message to the parents of the students thanking them for their dedication to raising some of the finest Imperials in the outer regions of the Empire. Parents interested in enrolling their children in the award winning Drayson Academy should contact the local Imperial Youth and Imperial Security Bureau Officers for information.