BYBLOS (SOCIAL) - Reports are filtering back from Hosnian Prime that a new narcotic has been discovered. First thought to be an isolated incident but now believed to be tied into the growing drug trade originating in terrorist-controlled space. Security Officials have confirmed a large number of these drug trafficking organizations masquerading as medical groups have been springing up all over the galaxy in the last couple months. Officials at the largest settlements on Hosnian Prime have reported non-Imperial ships offloading crates filled with drugs. 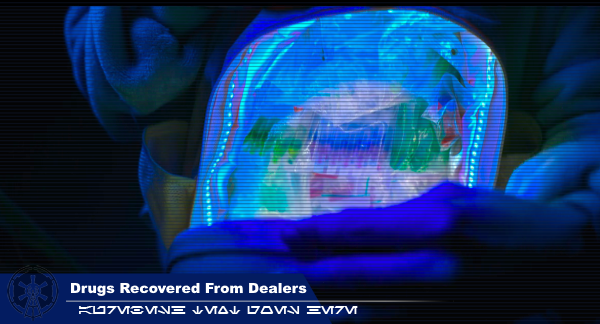 Distribution of the spice is still subject for investigation. Planet-wide authorities are urging the civilian populace to be weary of suspicious individuals harboring medicinal vessels such as flasks and vials. The illegal sedatives are most likely circulated by drug dealers from the very same drug trafficking groups posing as merchants of medicament trade or amateur unlicensed practitioners of medicine allowing the effects of the drug have spread to all hemispheres of the beleaguered planet. The street name for the drug is called "Bliss" although there are sure to be other names for the substance. The effects of the drug are very deadly to those with cardiac problems or any other underlying respiratory defects. Long term users are known to develop a pinkish hue around their eyes and nostrils. Law enforcement has been trying to track down exact supplier/s of the narcotic but as of, yet they have not found confirmation of who is responsible. Any evidence of the drug being manufactured on the planet are still pending.

As of now, the factors subject to the drug called "Bliss" are jointly handled by the planet's law enforcement and the Imperial postwar relief effort. If you or anyone you know have information on this please contact your local law enforcement, rewards are being offered for tips that lead to prosecution. The public is also advised to seek out medical attention as soon as possible if they suspect anyone they know is under the influence of the hazardous drug.