SITH WORLDS (SECURITY) - Earlier this month, an elaborate game of cat and mouse traversed multiple systems and backwater worlds to recover an invaluable Sith Holocron belonging to a mausoleum of Dromund Kaas. The artifact was allegedly stolen in the dead of the night and was found to be missing during a memorial ritual by one of the resident acolytes. The fact that the crypts, erected in solemn remembrance and sanctity, were robbed, is a profound testament to the insolence and gall of the thieves. A highly confidential and investigative report on the matter has been provided to the Imperial Information Service by the Inquisition, following its declassification. 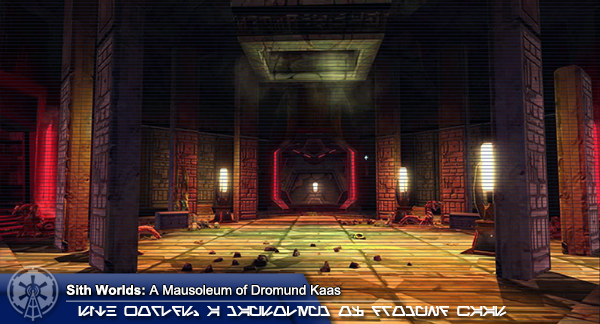 The heist was tedious in execution yet meticulous in technique. The thieves made use of methods no ordinary burglars would be capable of. Caseworkers from the Imperial Security Bureau deduced the modus operandi as follows: Infiltration of surveillance; convincing disguises and a comprehensive study of historical blueprints dating back to the Sith Empire. They must also have had an astute understanding of ancient tombs or access to someone who did. All of the equipment has been revealed to have been purpose-built, indicating that significant time and resources were invested in bringing the robbery to fruition. The break-in occurred in Dromund Kaas, the headquarters of the Sergeti Enclave, with the attack perceived to have been directly targeting them. In retaliation, the Sergeti Enclave dispatched one of their own, Darth Loukanikos, to follow all traces. Their cunning allies from the Kintik Enclave also provided support to the investigation. Darth Epistus, head of the Kintik Enclave, coordinated the transits and authorization needed to ensure the Sergeti master caught the sacrilegious perpetrators without impediments. Discrete journeys were made to several planets from the Outer Rim to the Core Worlds, tracking down locations visited by the smugglers. The operation remained purely a Sith affair, with the matter under the directive of the Dark Lord, Darth Taral. Paramount secrecy enabled the recovery of the stolen artifact and its return to the tomb.

The greatest mystery is how the ragtag crew retrieved the holocron from its pedestal without triggering an alarm mechanism. A finely shaped crystal, approximately the size of the relic, was found in its place. None of the robbers were reported to be force sensitive and thus would have been unable to commune with the holocron themselves, though it would most certainly fetch a handsome sum in underground markets seeking to undermine the sanctity of the Sith tradition. The ancient defense mechanisms were not activated during the theft, nor did hoary puzzles did not stop the progress of the interlopers either. The custom made tools and the purchased knowledge played a major part in solving the riddles of the old catacombs. Fragments of extremely valuable cortosis alloys were also discovered on the premises and were collected as evidence. The modern security was disabled, but unfortunately for the thieves, they were unable to restore security to cover their tracks before departing. Darth Loukanikos gathered evidence by piecing together a timeline of the events, though the procedural steps undertaken by the Order of the Sith will remain classified to date.

The investigation took a month's worth of trailing starting from the outlying systems of the Sith Worlds to the backwater worlds of Hutt Space. The finale of the adventure occurred in a smuggler-infested cantina on Corellia where the malefactors had been identified. Darth Loukanikos and his accompanying acolytes quickly recognized those who snatched the holocron from the tomb and motioned to their direction, ignoring the armed crowd. A bar patron took offense to the unexpected gesture of movement and thus discharged a blaster at the Sith. Facing unprovoked aggression, the Sergeti detachment mercilessly carved their path through the inhospitable thugs. The criminal delinquents did not stand a chance against their righteous might. The lowly criminals were subsequently taken away to an undisclosed location. Surprisingly, the Holocron artifact was well intact with them. It was inferred that they intended to meet a buyer at the cantina. At the moment, the Holocron is now safely back in its place of honor in the Sith mausoleum vaults. The Order of the Sith has now dispatched additional security for the safekeeping of the precious artifact for the foreseeable future. The fate of the perpetrators will be relegated to the Department of the Inquisition and ultimately, the Order of the Sith.

Part of the publicized report of the case claims that the smugglers hoped to sell the artifact for much more than what they invested in its abduction. The trespassers were a professional crew of proficient treasure hunters that specialize in stealing artifacts and putting them up for auction in popular auction houses, minimizing their market presence through the use of proxy sellers. The Imperial Security Bureau advises caution when dealing with unidentified sellers as well as force relics, as per the ICC-14 Imperial Criminal Code and The Force Act under points 2.2 and 2.3. Please report any suspicious sales or items in the market or auction houses to the Imperial Security Bureau.