An Iron Will Yet Unbroken

Imperial News Grid - "An Iron Will Yet Unbroken"

CORUSCANT (CULTURE) - Over the past months the Imperial Information Service has laboured day and night to keep up with a long-standing Imperial culture of periodical publication. A new issue of the Imperial Magazine "Iron Will" was published earlier this week, fulfilling the promise made at the last Imperial Monthly Meeting. The Year 20 Quarter One issue breathes new life into a reportorial tradition spanning more than a decade. The Ministry of Culture has already reported premier success from the magazine's distribution as for the first time the quarterly publication has also been made available to audiences outside Imperial territory, thus findings its way into the homes of many sentient beings often left outside the sphere of Imperial quality and idealism. 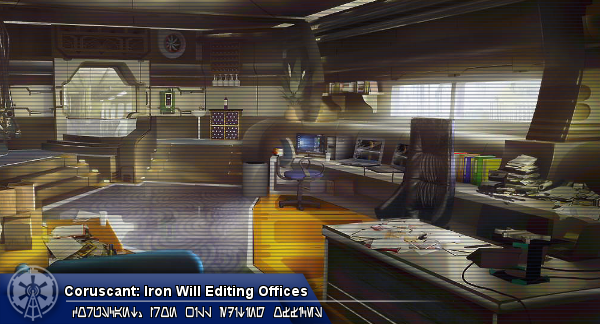 While simultaneously performing her duties of Adjutant of the Coruscant Oversector, Phaedra Thester acted as the issue's Editor-in-Chief; steering the project from its content preparation in draft writing to the final print at the end of the conveyor belt. The released result came to fruition due to Adjutant Thester's phenomenal oversight of the project. From his office at the Government Administration Building on Coruscant, IIS Director Patrick Mueirech provided firm support, ensuring the Iron Will's progress, publication and distribution proceeded unhindered.The first new Iron Will in three years attained widespread acclaim when the first responses from Imperial officials began pouring in. Command General Emillio Peares, the Imperial Army Signals Officer, personally contacted the Service to explain his love for the new issue and thank the staff for their efforts. Senior Adjutant of the Tapani Oversector Nikolaus Ephranor had his personal secretary inform the writers he thought it was "awesome" before stating that he would make the Iron Will mandatory reading for his entire staff.

The renewed Iron Will is available in pristine hard copy and for digital download on datapads featuring the following highlights: