CORPORATE (Security) - Officers from the Imperial Security Bureau conducted a sweep of various commercial entities recently. The operation, coordinated by Chief Navarro de Molay, acted on reliable information from a confidential source exposing apparent insider trading, tax evasion and corporate espionage to senior officials at the ISB Offices in the Corporate Sector. In response, Chief de Molay deployed a battalion of stormtroopers, accompanied by specialist investigative support staff to over a dozen corporate offices in order to secure databases and other relevant evidence. All raids were conducted simultaneously as Chief de Molay, a Sith Knight and battle-hardened Army Veteran, personally questioned the respective Chief Executive Officers subject of the allegations. 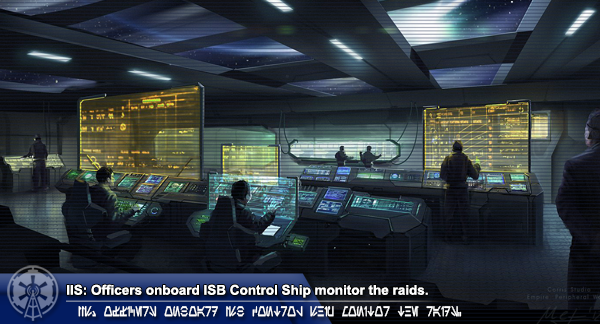 Stormtroopers effortlessly secured control of the relevant buildings preventing entry and exits whilst the raids were conducted. Resistance appeared to be minimal, with compliance failure met with the full weight of Imperial Law, the Bureau's operation passed without impediment. Employees were moved to designated secured areas inside the facilities so that work stations could be investigated without disruption, and relevant staff could be questioned. Specialist Bureau slicing teams made quick work of firewalls, safelocks, and encryptions on servers and terminals. Their successes confirmed some suspicion as four of the companies were found guilty of tax evasion estimated to be in the hundreds of millions of credits. The senior executives of the companies were detained while their families were taken under watchful eyes into protective custody. Two other companies were guilty of attempting espionage and patent infringement when the investigations revealed partial blueprints on engine designs for Imperial Star Destroyers. All workers and members of staff from various parts of the corporations will undergo investigation and were taken away for questioning by several of the teams.

The Imperial Security Bureau highly encourages anyone who carries information regarding either the cases be submitted to their local ISB office. Any knowledge or evidence that will aid the speedy assessment of the cases is welcome by all means. Vigilance is called for on the part of every Imperial to report any potential crime regardless of how insignificant if it relates to the security of the Empire and its citizens. Strict confidentiality and secrecy is used throughout all investigative processes and information is reviewed carefully, promptly and in a sensitive manner.