PRAKITH (MILITARY) – The Imperial Academy’s TIE Squadron School played host to a variety of experimental TIE fighter designs. Presiding over the event was the Academy Commandant; Secretary Auberin Jaxson; Army Commanding Officer, Lord General Solus, and Naval Commanding Officer; Lord Admiral Drenall all of whom eagerly observed the performances. The experimental designs provided through Corellian Engineering Corporation and its subsidiaries covered a variety of demands as the Navy seeks to expand its fighter capacities for patrols and capital ship support. 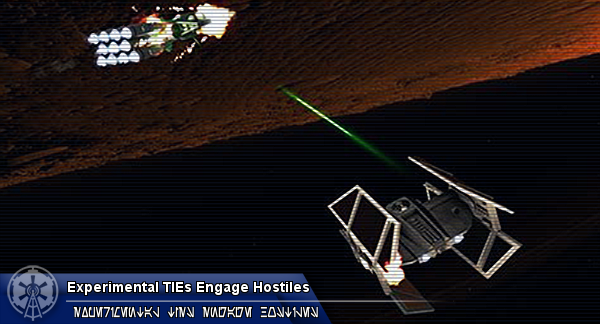 At the behest of CEC, they sent their Chief Operating Officer Everard de Montfort to the Prakith exposition to give his presentation and demonstration of the new TIE. "Our engineers, technicians and all of the company's brightest have tested a prototype that's able to repel the arsenal of small fleets, contest with corvettes, and deliver excruciating blows to the enemy in space warfare. Furthermore, the classification of such experiment shall be the first of the Heavy Fighter series of TIEs." remarked by COO de Montfort's introduction to the project. Corellian Engineering Corporation had designed prototypes to fit the wing curvature of the TIE Bomber's solar arrays for improved maneuverability compared to the standard line TIE Fighters. Altering the shape of the wings does not hinder the fighter craft from any lack of power. The winged solar panels still provide adequate power to the solar ionization reactor of the TIE. A wider body framework allows for a reinforced durasteel-alloy hull. With an added surface area to the fighters' fuselage, the fighter compartment housed stronger deflector shields capable of withstanding heavy turbolaser fire and to an extent; missiles propelled by other fighters. Fighter utility has been expanded as well to accommodate a squadron rapid response within all regions of the Galactic Empire if the need arises. That being said, hyperdrives are enhanced to commit swift jumps to the intended destination. The life support systems extends a TIE pilot's standalone exposure to the cold and unforgiving space and could last without docking in a hangar of a ship or station. The armaments of experimental design comes along with L-s9.3 laser cannons capable of blasting small bodies of asteroids in one shot compared to the standard L-s7.2 laser cannons in the standard TIE Fighters.

Finally, the prototype design is now able to deploy a series of cluster missiles from its arsenal. This extra pack of firepower is to combat enemy corvettes and small frigates alike that are in the enemy armada. Even with this support mentality in mind these experimental TIEs can hold on its own in fighter dogfights, even surpassing the New Republic starfighter, the T-65 X-Wing. To display the fighters’ combat prowess Imperial Intelligence released data to the hand selected pilots testing the equipment. The academy deployed the fighters to engage pirates and smugglers in the sector of the Academy. The gang of miscreants were confirmed to utilize two CR-90s and two C-Wing squadrons which quickly fell to the swarm of roaring TIEs.

The exposition went well with heavy applause during the live demonstration of the Experimental TIEs. The performance of the TIEs garnered the interest of potential outside investors neutral to the Empire. The CEC adamantly guards its schematics to prevent leaks and unintended outsourcing, ensuring that the improvements of this TIE model are exclusively reserved and available for use only by and within the Galactic Empire. It is yet unknown if and when the contract for production will be awarded or if the Imperial Military in association with the Imperial Treasury require further refinement of the final products.