The Long Arm of the Law (ING)

Imperial News Grid - "The Long Arm of the Law"

TANJAY (SECURITY) - In a rare, and understandably packed, live press release earlier today, the Ubiqtorate confirmed the seizure of stolen assets thought to be worth over three billion Imperial credits from smugglers, according to conservative estimates. The cargo was identified while in transit within the Core Worlds and plans were quickly set in motion for its recovery. The equipment in question, being the rightful property of the Imperial Army, had been wrongfully displaced from Imperial storage facilities by thieves seeking to make a quick profit off of the hard work of Imperial citizenry. The case never went cold, as the watchful eyes of Imperial Intelligence leave nothing unpunished. 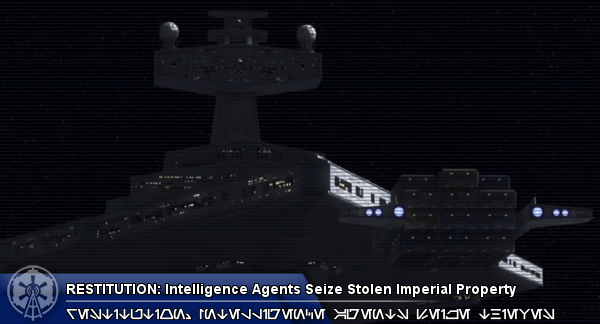 Receiving a few key anonymous tips quickly led members of the Imperial Security Bureau to the trail of blood for these unfortunate smugglers. Enlisting the help of operatives from the Bureaus of Operations and Analysis, the trio of Bureaus worked in tandem and identified the underworld sect in possession of the cargo. They quickly developed a plan for the extraction of the equipment and arranged for the interception of the vessels carrying it. Launching the operation with overwhelming force, the suspects were taken into custody by the operatives in the field, with the cargo secured and restored to its rightful owners, after passing through thorough checks by the Imperial Port Authority for any tampering or degradation. Sources from the Port Authority confirmed the estimated value of the captured goods, but refused to provide an exact number. It is understood that the smugglers are being detained in the Byden ISB Complex on Coruscant and are being processed for further information they may be withholding from coming to light.

Director Jett Blackheart's press secretary described the mission as a "resounding success", and revealed that the Emperor himself had transmitted his congratulations to Imperial Intelligence for its expeditious and efficient processing of the operation. The press secretary further noted that Deputy Director Tec Vaan would like to remind all Imperial citizenry that theft is a heinous crime which will not be left unpunished; any who seek to profit from their access to Imperial assets will be dealt with harshly. No matter where they try to run, no matter where they seek to hide, the long arm of the law shall catch up with them. Citizens are also warned not to purchase known restricted goods sold by unsanctioned vendors without first consulting the Imperial Security Bureau about their authenticity, to avoid remunerating thieves and imitators.