A System on Fire (ING)

HOSNIAN (MILITARY) - The Imperial Information Service (IIS) gives news all the way from the frontlines in conjuction with Army Command (ACOMD), who has given the IIS exclusive permission to deliver a coverage on a squad of Imperial Army troopers part of the Rapid Response Force during the early stages involved in the Hosnian System. The elite Storm Commando squad code named 'Carnage' was one of the incipient units to partake in the conflict. Carnage Squad consisted of handpicked soldiers from all corners of the Imperial Ground Forces. Their expertise includes Reconnaissance, Sabotage, and High Value Target (HVT) Extraction. Ever since the start of the campaign, Carnage was deployed where the battle was the thickest up the forefront vanguard to meet the opposition and to achieve a breakthrough of enemy lines. 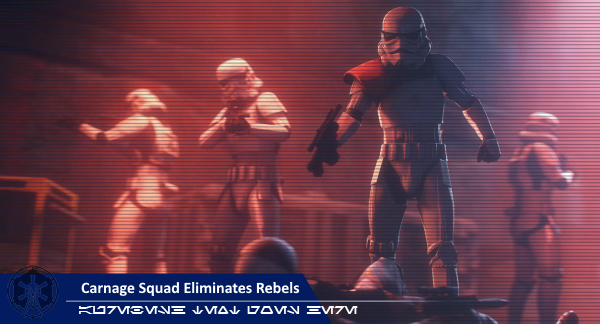 Military Theorists agree that urban warfare by far has been the ferocious kind of warfare for ground assaults. Brigands, pirates and rebel dissidents plunder, pillage and terrorize the would-be settlers of the newly war zone systems. Most notably among the scum and villainy is the dishonorable criminal syndicate the Zann Consortium garrisoned among the homes of Hosnian with innocent families used as human shields. Carnage Squad mobilized to neutralize the bandit threat maneuvering deftly across the war-torn landscape. Efforts of suppressing the invading enemies have been successful but the war is far from over for the forces stationed here. Nevertheless, Carnage Squad's fortitude in the face of death in the heat of battle merited them recognition from senior commanding officers. Their display of combat prowess in war torn cityscapes is noted. Carnage Squad has racked up a remarkable 600 confirmed kills between Rebel and Zann forces earning the officers various awards.

While Carnage has enjoyed success they too have experience their own failures and losses. The initial deployment was ferocious and took the life of one of their Rookies. Carnage joined the charge led by General Vonrico acting as a member of his guard as he led a bloody and daring engagement. Sergeant Aleena Vetar gave her life in the line of duty while advancing through enemy fire alongside the General as they hunted down known Zann Consortium Defiler Seth Haze. The young Soldier was 24 years old and had six years in service, enlisting at the age of 18 when she and her counterpart General Vonrico engaged the Kaleesh terrorist. Outnumbered and outgunned the duo took down multiple adversaries before the Consortium forces overran their fighting position.

Both Sergeant Vetar and General Vonrico are lived on by their family and friends. COMPNOR and Army Command have agreed to create the Hosnian Memorial Center where their statues will be placed in their memory.