(KUAT) SOCIAL - His Majesty's Imperial Navy is proud to announce the Imperial Union Commemorative Ball held at Firebase Kuat Centre in orbit of Kuat, the traditional headquarters of the Navy. The Commemorative Ball continues a long tradition of festivities organised by the Galactic Empire to celebrate its heritage and honor those who dedicate themselves to its continued excellence. Notable attendees include an expected presence from the Throne as well as Lord Admiral Kef Drenall and Fleet Admiral Fenris Soontir, of Navy Command, who will play host to visiting dignitaries from throughout the Empire and greater Imperial Union.

Firebase Kuat, a storied station, has undergone fierce preparations in the months leading up to this event to accommodate the finer tastes of the attendants, as well as to provide the lavish ambiance expected of such an occasion. The Firebase has traditionally served as an elaborate working base for the Lord Admirals of the Empire when they were not otherwise occupied at the Imperial Palace. As such, it is no stranger to providing the necessary amenities to accommodate the Lord Admiral and any guests they may have, yet the scale of this event has required extensive renovations, which we are assured will make a positive impression on all who are invited. 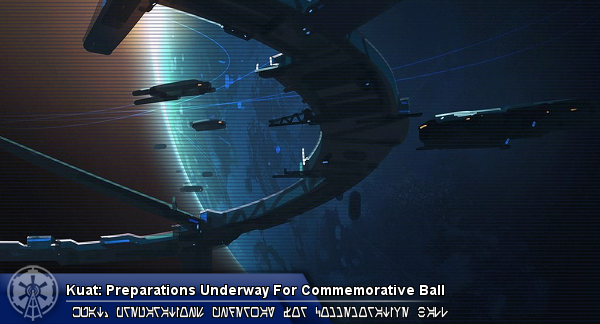 Guests of the ball will have the opportunity to partake of a menu crafted solely for the event, exhibiting a range of culinary tastes found throughout the three Regions, as well as dance in the Firebase Ballroom, with a view towards the galaxy through a magnificent and colossal viewport. The purpose-made viewport was a necessity, as the event will play host to a parade of honour by the Imperial Fleets which will conduct a flyby to exhibit the might and glory of the "long arm of the Empire" for all to see. It is expected that these festivities will be treated to a special address from the Throne and speeches from the Navy Command itself. Press coverage will be limited only to journalists expressly authorized by the Imperial Information Service. As the event is expected to attract attendants from all the corners of the Empire, and the Galaxy, overnight accommodation will be provided planetside at the upscale Tekshar Falls district of Kuat City.

All actively serving Imperials are encouraged to attend, as the Ball provides a joyous occasion to fraternize while representing the very society we seek to build and protect - one of prosperity, safety, and abundance. The event will commence on Day 307, though guests are reminded to arrive in advance, as traffic is expected to be high.