The 2nd Imperial fleet was formed in Year 12 with pilots and officers from other units that all came together to hold the ground and maintain the tradition of Imperial Navy excellence. Known for it's history of strong leadership, high-quality pilots and a commitment to achievement of the highest standards, the 2nd Imperial fleet is often looked upon with envy as one of the proudest fleets in the Navy. The vast stretches of the Kuat Sector and the lives and well-being of the Imperial citizens calling it home required some of the most skilled pilots the Empire had to offer. Out of this need The Second Fleet was born.

Boasting one of the most storied, and outstanding histories of any military unit in the Galactic Empire. The fleet is home to some of the Empire's oldest and most venerable vessels and has been commanded by some of the most shining officers the galaxy has to offer; Men such as FADM Samurai, LADM Ascarion, ADM Saretti, FADM Savk and LADM Sean.

Members of the 2nd Fleet carry this tradition of strong leadership, impressive piloting skills and nerves of steel. Speed, stealth, courage, and precision are the calling cards of its pilots. At all times striving to live up to the expectations and trust placed in them, everyday, fulfilling the fleet's motto "Secunda Optima Est"

The 2nd Imperial Fleet, has a proud history and is recognized as one of the finest fleets in the Imperial Navy. It has been the home of many revered officers and pilots and has gained many accolades for her service to the Throne.

Groups of the 2nd Fleet

"The 1st Group" Activated from the reserves in Y17, the 1st Group received a full personnel transfer from the 2nd Group. The vast stretches of the Kuat OverSector and the lives and well-being of the Imperial citizens calling it home require some of the most skilled pilots the Empire had to offer.

The 1st maintain the proud traditions of the Second Fleet, upholding its reputation for speed, strength, passion and courage.

Boasting one of the most storied, and outstanding histories of any military unit in the Galactic Empire. The fleet is home to some of the Empire's oldest and most venerable vessels and has been commanded by some of the most shining officers the galaxy has to offer; Men such as FADM Samurai, FADM Ascarion, ADM Saretti FADM Savk and LADM Sean.

Members of the Second Fleet carry this tradition of strong leadership, impressive piloting skills and nerves of steel. Its pilots at all times strive to live up to the expectations and trust placed in them, everyday, fulfilling the fleet's motto "Secunda Optima Est"

In Y17 the 2nd Group was rotated into the reserves, with all its personnel transferring into the newly activated 1st Group. 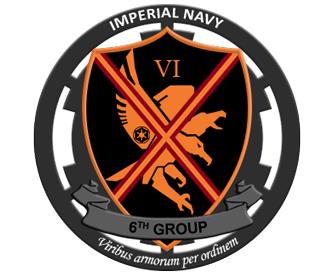 The 6th Group was formed on Year 8 Day 276, as the 6th Imperial Fleet. After the merger of the Galactic Empire and the New Imperial Order, they were assigned to Corporate Sector where they served as the backbone of the Empire's defenses of its far flung Oversector. Re-designated during the Year 12 reforms as 6th Group, the Group joined the 7th and 12th Groups to form the 6th Imperial Fleet. 6th Group continued to sever in 6th Fleet until Year 17 Day 200 when it was transferred to the Second Imperial Fleet.

Tasked with protecting the Imperial Worlds of the Corporate Oversector, the 6th Group is a group within the Second Imperial Fleet with the potential to bring enough firepower to a fight that can outgun most fleets in the galaxy. Its remote posting is a demanding one, and breeds self-reliant and stubborn officers who live and die to defend the Empire.

Called “The Imperial Eagles”, the 6th Group follow their motto to the letter. Order through strength of arms! This Group is composed of some of the most fearless men and women serving the Galactic Empire. Protecting the remote Corporate Oversector is not for the faint of heart. Far from the Galactic Core, cut-off from the rest of the Empire, supply lines stretched by vast swathes of space, the 7th Group maintains a watchful eye over the immeasurably important and symbolic Sith Worlds.

The difficulty and significance of their duty is not lost on the officers of the 7th. “Discipline. Courage. Honour.” The words of the Group's motto are not merely a creed to live up to but the requirements for survival in the unforgiving and remote regions it deploys in. Some of the best men and women in the Navy emerge from the forge of these conditions, and officers are expected to quickly develop the guile and tenacity to succeed. This process molds the officers of the Group into loyal, fierce, and creative soldiers, earning both fear and respect from their enemies.

The history of the Group also offers insight to these qualities. Originally founded as a special operations fleet, the 7th Imperial Fleet was formed during the Naval reforms of Y9. Completing many key missions, including a large number still highly classified, the 7th earned a reputation for its highly trained officers and its willingness to innovate and develop new strategies to defend the Empire. Following the unification of the Galactic Empire and the New Imperial Order, the 7th Fleet was reassigned from its previous home in the Corellian Sector to the outlying Corporate Oversector. There its adaptability was key, and the tenets which hold true today were imbued.

During the reforms in Year 12 the 7th Fleet was renamed to the 7th Group, joining the newly-formed 6th Group as part of the 6th Imperial Fleet. There it gained a focus on reconnaissance, taking on dangerous but invaluable missions in the Corporate Oversector. Eventually the 7th Group was moved into the Reserves, its expertise being dispersed into 6th Group to better support the fleet as a whole.

Now 7th Group has been reactivated under the auspices of the 2nd Imperial Fleet. Once again the officers of the 7th ply the spacelanes and stellar backwaters of the Corporate Oversector. Referred to colloquially as the Widowmakers after one of the Group's most famous flagships, the men and women of the 7th hold the line against criminality and disorder, and do so with a determined expertise that ensures their reputation among the Empire's enemies reflects their informal title.

Inheriting the attributes of her Commanding Officers, the Second works tirelessly to ensure that their reputation is well represented and maintained. Objectives are tackled with a keen and tactical eye, ensuring coordination and machine-like efficiency. The Second has a reputation for getting things done swiftly and with high accuracy.
Pilots are held to the highest standards and are rigorously trained and tested through combat drills and tactical maneuver training. It is because of this training that the Second Fleet's pilots have, time and again, raised many eyebrows among the Navy for their deadly efficiency in battle. Such efficiency has been tested time and time again by numerous high-risk operations. The Second has always held its own against any opponent it has ever met.
Within their areas of operation, the Second Fleet is tasked not only with sector defense and security but also aids in humanitarian efforts such as disaster relief and recovery and interplanetary diplomacy. As is customary, the Second works hand-in-hand with the Regional Government, and the Army, to ensure that all initiatives are shared and common goals are achieved.